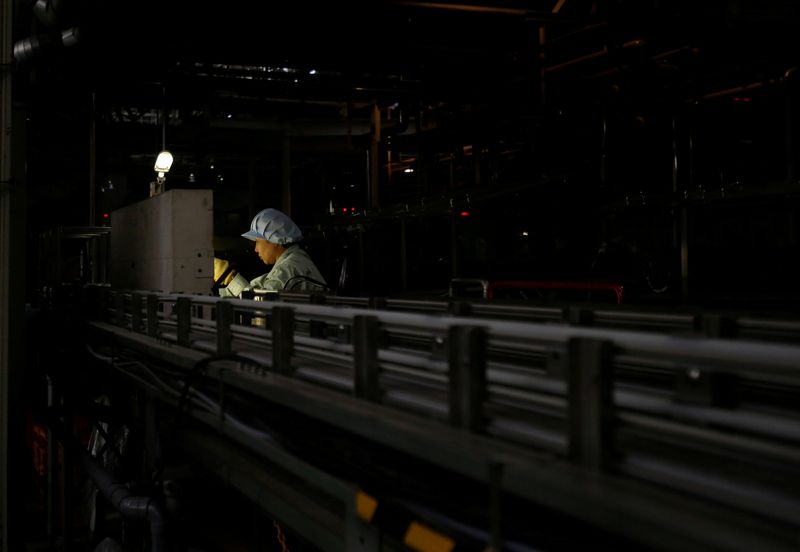 TOKYO (Reuters) – Japan’s manufacturing activity contracted at the fastest pace in two years in November as demand worsened due to strong inflationary pressures, a business survey showed on Thursday.

The contraction in factory activity also marked the first monthly decline in 22 months and raised a question mark over Japan’s economic outlook as the country relies heavily on trade with China and other nations for its growth.

The au Jibun Bank Flash Japan Manufacturing Purchasing Managers’ Index (PMI) slipped to a seasonally adjusted 49.4 in November from a final reading of 50.7 in the previous month.

That meant activity recorded the sharpest contraction since a 49.0 reading in November 2020 and fell below the 50-mark that separates contraction from expansion for the first time since January last year.

“Manufacturing firms also seem to be increasingly wary about their future as indicated by a drop in business sentiment which put the index at its lowest level since May.”

Output contracted at the quickest pace in 26 months, falling for the fifth consecutive month, the survey results showed.

The survey showed the rate of input price inflation dipped to a 14-month low, suggesting cost pressures were easing somewhat, though input prices continued to rise at a historically high pace.

Activity in the services sector stagnated even as new business inflows grew for a third straight month, the data showed.

The au Jibun Bank Flash Services PMI Index came in at a seasonally adjusted 50.0 in November, down from the previous month’s 53.2 final, the survey showed.

That could not prevent the composite index, which is calculated by using both manufacturing and services, from staying out of contraction.

The au Jibun Bank Flash Japan Composite PMI fell to 48.9 from a final 51.8 in the prior month, contracting at the fastest rate since February.

Data last week showed Japan’s economy unexpectedly shrank for the first time in a year in the third quarter, stoking further uncertainty about the outlook as global recession risks, a weak yen and higher import costs took a toll on household consumption and businesses.