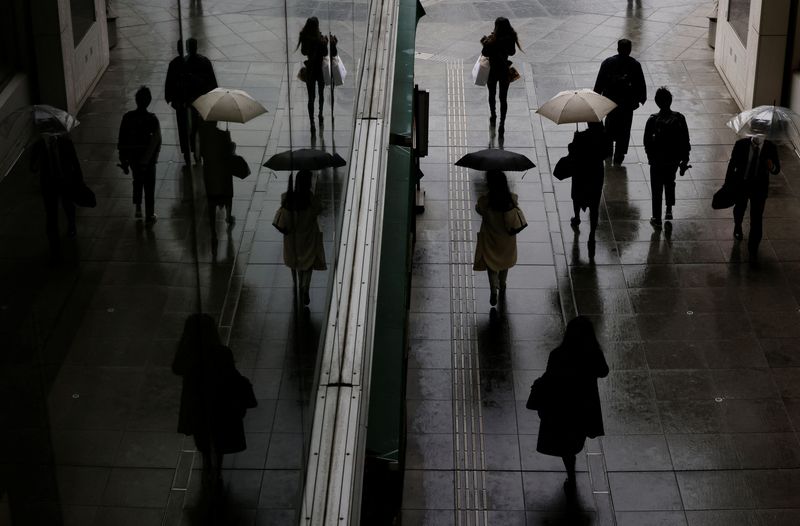 FILE PHOTO: Pedestrians are reflected on a wall of a shopping mall in Tokyo, Japan November 15, 2022. REUTERS/Kim Kyung-Hoon

TOKYO (Reuters) – Japan’s government left the overall assessment of the nation’s economy unchanged in its monthly report for November, noting a moderate recovery but remaining cautious over risks from a global economic slowdown and financial market fluctuations.

The economic report from Japan’s Cabinet Office comes after data showed last week the economy unexpectedly shrank for the first time in a year in the third quarter, as sluggish global growth and import costs hurt consumption and business activity.

It also follows data showing that manufacturing activity in Japan contracted at the fastest pace in two years in November because of strong inflationary pressures.

“The economy is picking up moderately,” the government said on Thursday, using the same description it has in every monthly report since July.

The government would stay vigilant to the risks ahead, saying the global slowdown from monetary tightening could hurt Japan’s economy. It said again it needed to “pay full attention” to any economic impact from inflation, supply restrictions, and financial and capital market volatility.

The nation spent a record 6.35 trillion yen ($45.6 billion) on currency intervention last month as its currency plummeted to a 32-year low to the dollar, likely triggering authorities to step into the market.

Tokyo also kept its view unchanged on private consumption, which accounts for more than half of Japan’s economy, saying it was “picking up moderately”.

The report said spending on services such as restaurant dining and accommodations was recovering, although rising prices were weighing on consumer sentiment.

The government left its view unchanged that capital spending was recovering thanks to solid corporate earnings, while it said exports and imports were “almost flat”.

It also said factory output was showing signs of recovery, the same as last month, supported by solid demand for transport machinery and semiconductor manufacturing equipment.